If you’re like us, you’re already nuts over NuttZo, but once you read the inspiring story of NuttZo CEO Danielle Dietz-LiVolsi you will be head over heels in love with the incredible person behind this nutritional super food! The goodness and well-being in every jar of NuttZo comes from far deeper than a blend of healthy nuts and seeds!

“Mom Turns Her Nutty Idea Into a Million Dollar Business”

By the age of 32, Danielle Dietz-LiVolsi thought her path in life was pretty set. She had a great husband, a happy teenage daughter and a six-figure income. The successful San Diego radio sales rep was simply looking forward to her 40s, when she and her husband, Kevin, planned to take off on a pair of Harleys and see the world. But all of that would change one night, as the couple lay in bed, watching an episode of “20/20.”

“It was about the orphanages in Romania,” Danielle remembered. “Neither of us said a word for the entire hour. It was just devastating to watch. Kevin had to get up early, so we didn’t even discuss it afterwards, but the next morning I called him and said, ‘What would you think about adopting?’ and all he said was, ‘That’s why I married you.’”

And while the couple had their hearts set on making a home for one of those children they saw on TV, it wasn’t long before they learned that Romania had suspended international adoptions. That’s when a local agency led them to Ukraine, where they found and fell in love with 3-and-a-half-year-old Gregory.

“We spent two weeks in the Ukraine getting acquainted with him,” Danielle explained, “and every time we were at the orphanage, he’d just point at the driver who brought us there, like he wanted to get in that car. And we’d see 15 pairs of eyes crowding the windows, looking out at us. They all just want to go home with you. It’s haunting.”

So haunting that no one was surprised when the couple went back, three years later, and brought home Mathew, a 1-and-a-half-year-old boy who would complete the Dietz-LiVolsi family.

But the adoptions were just the beginning of helping the boys build new lives. Both children were severely malnourished and Gregory refused to eat any sort of animal protein. Danielle, who grew up on a 137-acre farm in Pennsylvania filled with livestock, fruit trees and vegetable gardens, was determined to find something she could feed her sons.

What she hadn’t planned on was the nutty way she’d end up with a million-dollar food empire that would not only feed her family, but improve the lives of orphans around the world.

“The kids ate a lot of porridge in the orphanages,” she explained, “so they were used to really soft things. I had to come up with something that was a complete protein. And since I’ve always loved nut butters, I thought that might be the answer. But I knew I’d have to combine a variety of nuts and seeds to equal all nine amino acids it takes to build muscle.”

“Kevin would just cringe every time I’d pull out the food processor. There would be Brazil nuts, cashews, almonds and hazelnuts everywhere — 10 different nuts and seeds all over the kitchen and I’d just keep adding more and more to make it taste better. Finally he said to me one day, ‘Why don’t you just go to the store and buy it?’ And as I turned to say, ‘You can’t just buy this stuff,’ I realized what I was saying. And that’s when we looked at each other and said, ‘Why not?’”

It was an “aha” moment that would lead Danielle to leave her high-paying job and put everything she had into bringing the product she named NuttZo to market. She vowed not only to create the perfect recipe, but to find a way to make it work for kids who weren’t as lucky as Gregory and Mathew — the ones who had been left behind. 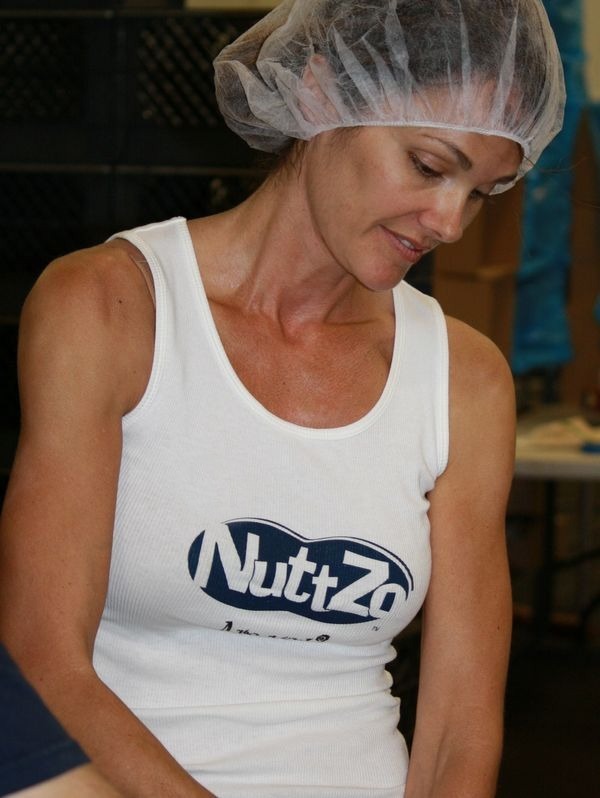 “I think I made more than 500 pounds of Nuttzo in my kitchen that first year,” Danielle laughed, “just to try and get the recipe right for manufacturing. And I’d have all my friends do taste tests. I’d put different versions in plastic containers and mark them A, B and C and they’d email me their favorites.”

“Once I knew I had it right, I put together an adorable basket, with a cute little jar I’d made in my kitchen, and surrounded it with all the things you’d eat with nut butter. Then I got in my car and drove to Los Angeles to meet with a buyer at Whole Foods.”

But there was one little glitch. Danielle didn’t have an appointment. “You hear stories all the time of people who just walk in with a product and it ends up on store shelves. And I had worked in sales, so I thought I knew everything. But that didn’t work out so well. They wouldn’t let me see her.”

“So I followed up with an email, and that’s when she pointed out that no one was going to try anything without a tamper-proof seal. I had never even thought of that. At that point, I knew we had to just move forward and start manufacturing.”

So without even one customer, Danielle moved forward. She placed an order for 500 jars — the minimum any co-packer would agree to produce. It wouldn’t have been all that bad if it weren’t for the other minimums she had to purchase — 50,000 jars and lids, along with 25,000 labels.

And when that first jar rolled off the line, she was ready to walk right back into Whole Foods and get that big sale.

“That’s when I found out,” she laughed, “they weren’t reviewing nut butters for another nine months.”

But that’s where her history in sales began to pay off. During the time Danielle was perfecting her recipe, she was also networking. She learned along the way that each Whole Foods store could buy products manufactured within a 100-mile radius independently. So, store by store, she began to make her way in. And with hundreds of jars sitting on the shelf, she thought she’d send a couple to someone she kind of liked.

“I thought Dr. Oz seemed so honest and down to earth,” the entrepreneur said. “It was before he had his own show, but he was on Oprah quite a bit. So, I sent him a couple jars and a month later I got an email back! He said he thought NuttZo was amazing, but he didn’t endorse products. But it was still one of those “holy moly” amazing moments. I couldn’t believe I got an email from Dr. Oz!”

And that email might have been enough to keep Danielle going had she and her husband not been back in bed, watching TV again. It was 2011, and by then Dr. Oz not only had his own show — which Danielle recorded religiously — he had his own “Hot List.”

“Kevin looked at me and said, ‘I thought he didn’t endorse anything.’ And the next morning I emailed him again. By the time I got back from yoga, I had a response. He was forwarding my information to a producer.”

Hours later, Danielle got the news — Dr. Oz was not only nuts about NuttZo, he was putting it on his show.

“I thought that maybe they’d be talking about Omega-3s and he might mention it. My family is on the East Coast, and they were able to see the show three hours ahead of me, so there I was on the phone with my Mom. We were 45 minutes into the show and I thought, ‘Great, just great, it’s going to be at the very end of the show.’ And then my mother started hyperventilating. I’m trying to get her to talk to me and she’s hyperventilating.”

“They’d been teasing the entire show, ‘The number one thing I can’t live without!’ and it was shaded, but my Mom knows what our jars look like, and she could see that it was a pyramid of NuttZo! Soon after that, my website crashed.”

That day alone, Danielle received more than 3,000 orders. But it was what happened after that which was really nuts. Customers began bombarding Whole Foods asking for NuttZo and soon after, the product Danielle once tried to simply walk in the door was on shelves throughout the country.

Today NuttZo is available in three flavors and on the verge of hitting the million-dollar mark — but the journey hardly ends there. Danielle and her family are devoting a percentage of the product’s sales to a foundation they created to help orphans around the world. Over the past four years, Project Left Behind has provided shoes, meals and education for children in five orphanages. They put a new roof on one in Peru and last year, she brought her boys to Panama, where 13-year-old Gregory picked out the colors that would be used to brighten an orphanage’s weary exterior.

“Never in a million years,” Danielle said, “would I have thought that at 45, I’d be where I am right now. But I guess you could say this was a positive midlife crisis. I’m so happy to be making a difference.”

“Imagine what could happen if everyone found a cause they were passionate about — the way we could change the world.”

The Grid Mini™ by Trigger Point on The Today Show

This past Friday, The Grid Mini™ by Trigger Point was a star on The Today…

Spring has arrived, the weather is warming up (even out east!), and SMACK! Media continues…

SMACK! Clients on the Press Podium

If you're anything like us, you have been glued to the TV and computer all…